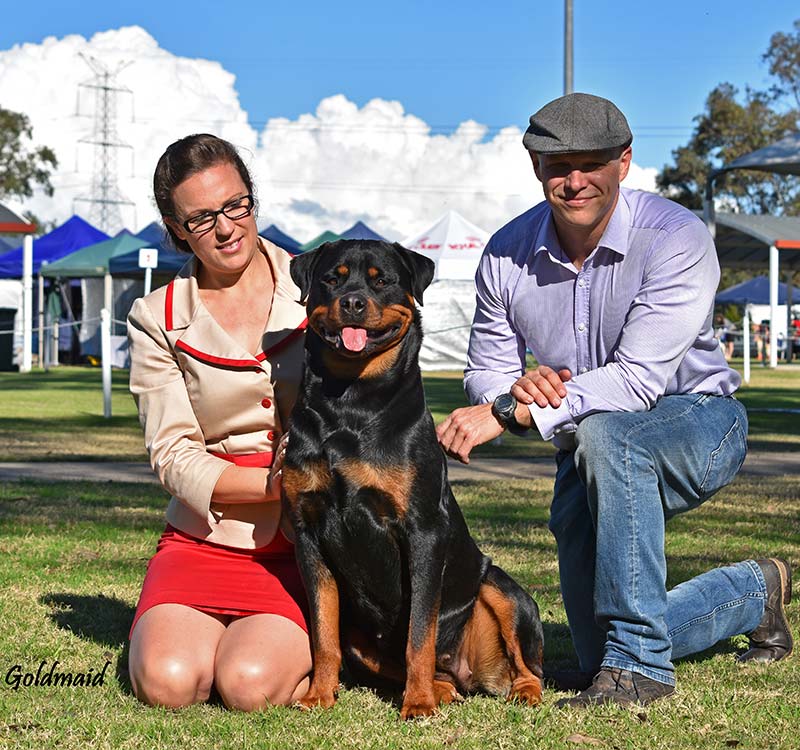 Photo: Brooke and Glenn
with “Dreamer”

Brooke: I was born into the breed of Rottweilers and they have been a part of my life as far as I can remember. My grandparents owned, bred and showed Rottweilers under their prefix Kleinhans and this was my first introduction to the breed. I began in the show world as a junior handler showing many breeds and went on to Win 3 State Junior Handler Competitions representing South Australia at the National Top Handlers competition. The first Rottweiler I owned I had great success with became an Australian and New Zealand Champion and was also Multi V1 rated under visiting International Specialists in both Australia and also New Zealand. She also went on to produce from her only litter, Aust Grand Champion & Nz Champions, Multi V1 rated and Multi BISS winning offspring.

I have actively shown for many successful Australian Kennels and campaigned many of my own dogs to V1 and NRCA Championship status. I have handled many dogs to Best In Specialty Show awards including a few of my own.

In 2008 I produced my first Rottweiler Litter under my previous prefix which produced several quality dogs used in Obedience, Showing, Working and also as family companions. Glenn was introduced to Rottweilers around 1987 when his father purchased him his first pure bred show dog. He showed the bitch in the All breeds ring for a short time before becoming involved in Bullmastiffs. Glenn became best known for his “Gameguard” Bullmastiff kennels in Australia and abroad for the past 30 years. As fate would have it I re-introduced Glenn back to Rottweilers when we met and he has been an active handler of top winning dogs since. As a partnership both Glenn and I have become GAMEGUARD Australia which is our kennel name for both Rottweilers and Bullmastiffs.

I am currently licensed to Judge Utility Dogs and I specialize in the Rottweiler. I have Judged Rottweilers at Specialty level in every state of Australia and New Zealand. I am also listed on the IFR Judges list as an Approved International Rottweiler Specialist. Glenn is also licensed to Judge Utility Dogs and is a Breed Specialist for Bullmastiffs, Glenn is currently working towards getting approval to become a Rottweiler Specialist Judge as well.